I always suspected the large rotor or propeller cannot have high efficiency at higher speeds and the general rule of thumb for propellers "larger is always better" cannot be true in all conditions, and above a certain speed the reverse is true. The efficiency analysis presented is based on the simple momentum theory, with added effects of flow viscosity over the blades, extracted from airfoil data.


Efficiency based on momentum theory

The momentum theory predicts that the efficiency depends on the free air velocity, the aircraft speed and the ultimate slip stream velocity

In order to maximize the efficiency, the overall induced velocity

should be as small as possible. Reducing the induced velocity, the thrust reduces as well, so to develop the same thrust, the mass flow

should be made larger, and the single way to do that is to increase the disk area A, as the air density is pretty much constant and from the moment theory for open rotors

All this reasoning is especially valid at slow speed, and along the same lines is the cause that helicopters have large rotors. 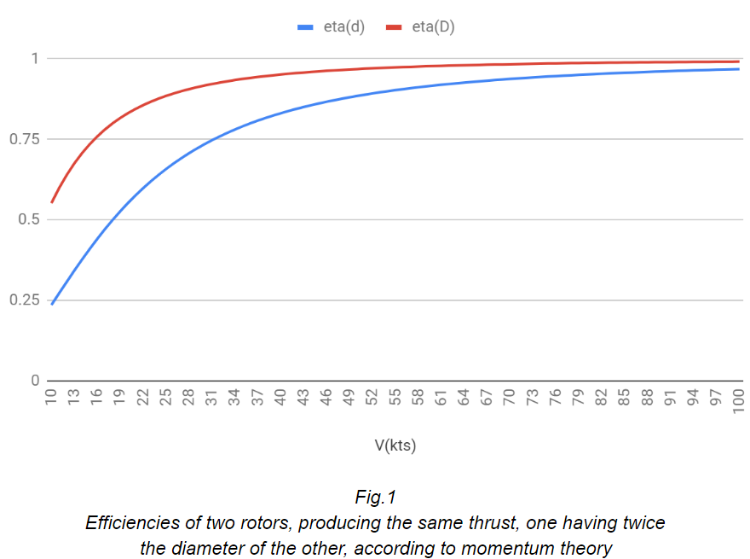 From the plot above, it seems that at very high speeds the efficiency approaches one, but let’s not forget, the momentum theory is valid only for inviscid flow, so the viscosity effects are not considered.

Considering similar blade geometry for both rotors, the L-rotor is having 4 times as much blade surface area. Looking at airfoil data for the NACA 0012 airfoil, a typical all-purpose airfoil, and comparing for Re 1,000,000 and 500,000 , L/D is 75.6 and respectively 61.7 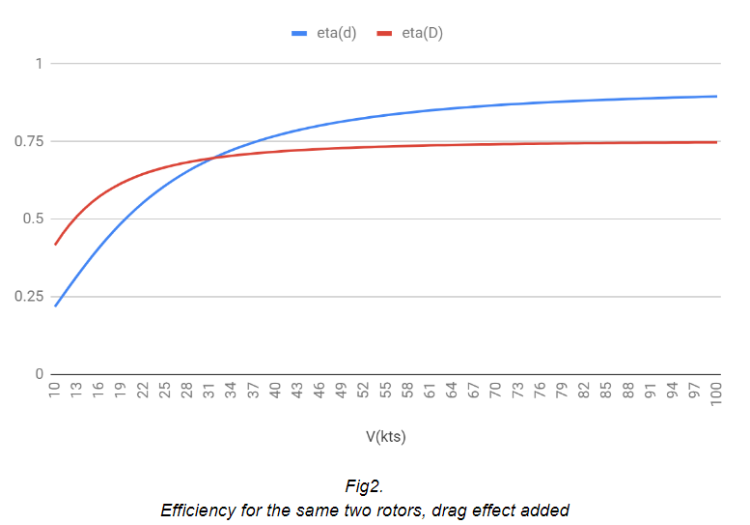 Now, some people might think: “If a smaller rotors is having less drag at higher speeds, would not a quad-copter having smaller rotors be more efficient than a helicopter at higher speeds?” This reasoning is false; the only reason the drag of the S-rotor is smaller is that its blade surface area is 4 times less than  the L-rotor. A quad-copter having 4 rotors, the total drag is 4 times larger, moreover the blades are having a larger drag coefficient caused by Reynolds number difference. Taking all this into account, the total drag of the blades for a quad-copter is 22.5% higher vs a helicopter, assuming same disk loading (the blade area is equal for similar geometry rotors).

The rotor for a VTOL vehicle has conflicting requirements: In hover and slow speed the rotor diameter should be as large as possible, to reduce disk loading and implicitly the power required for hover. At high speed, the rotor diameter should be smaller to reduce its drag. This was recognized early by NASA and other corporations, a representative study in the field is "Dynamic Model Wind Tunnel Tests of a Variable-Diameter, Telescoping-Blade Rotor System (TRAC Rotor), Evan A. Fradenburgh, Robert J Murrill, Edmond F Kiely" link: https://apps.dtic.mil/dtic/tr/fulltext/u2/771037.pdf Another document having a nice explanation of why the efficiency of the tiltrotor is low in cruise mode, and why a variable-diameter rotor is beneficial is here: https://ntrs.nasa.gov/archive/nasa/casi.ntrs.nasa.gov/19970005490.pdf